Sometimes, if you pay close attention, you can feel the tectonic plates shifting and grinding underneath our entire social and economic system.  As we imagine shifting business and the larger system into more collaborative and democratic patterns, we also must imagine shifting the way we organize to do work. A critical question that always seems to surface is “How do we do that when there’s so much at risk?”  Making deep structural changes to organizations means facing the uncertainties and discomforts of change and feeling the “earth” move under our feet.  No simple thing to experience, but many think it’s a reality for our future, nevertheless. 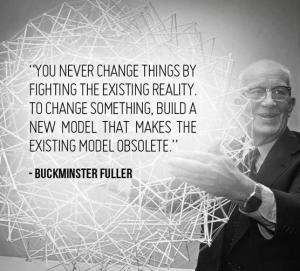 How are organizations beginning to think about reorganizing work to foster more creative freedom and collaboration?  Some of the first things to consider are organizing around shared purpose and values, clarifying roles and authority, and building trust and accountability. Some approaches use structures such as stakeholder engagement models, consensus decision-making, and systems for increasing transparency and decentralizing power.  Because there’s a lot at stake in business, organizations wanting change seek models that combine rigor with creative autonomy.  And, let’s admit it, we modern humans have kind of lost the knack for creating workplaces that are freedom-focused instead of fear-based, so we’ve got some relearning to do.

“Holacracy is a new way of running an organization that removes power from a management hierarchy and distributes it across clear roles, which can then be executed autonomously, without a micromanaging boss.”  It’s an approach to organizational structure and governance that is being prototyped in startups and existing enterprises. Holacracy is part of an emerging workplace democracy movement that also includes other concepts like Freedom at Work, the Happy Startup School and cooperative-ownership models such as Mondragon and our local Arizmendi. Recently, Nika Quirk spent two days in a Holacracy training in the East Bay and came away with many impressions and thoughts to share.

Rani: You recently participated in a two-day immersion into the Holacracy method.  Would you be willing to share why you were attracted to this training?

Nika: Over this year, I’ve been working as a coach with Miakoda Taylor, founder of Fierce Allies, an enterprise that fosters deep partnerships across divides of power and privilege.  Exploring the potential of Holacracy for her growing organization, Miakoda connected with Karim Bishay, founder of Clearer Paths Consulting to facilitate the Fierce Allies training and invited me to participate. Because collaboration is a core focus for me and I look forward to engaging with Fierce Allies as it grows, I embraced the opportunity to train with Miakoda and her team.

Rani:  Why do we need Holacracy? And, how does it work?

Nika:  (Laughing) I look at my beehives, Rani, and I say “that’s the point of Holacracy!”  All work is oriented to the purpose and prioritizations of the whole system.  The structure and practices seek to articulate roles with crystalline clarity (purpose, ownership, responsibilities and accountabilities) and streamline the application of energy to all work in the system.  This is a lean, sustainable system of work.

Holacracy is intended to engage every participant in governance, shaping both work activity and the evolution of organizational structure.  Everyone’s knowledge is valued, expressed and integrated and since participants have clear authority in their roles, they act with a balance of freedom and accountability. When implemented with fully distributed governance, Holacracy could be viewed as a powerful “hive mind” but with no “queen bee” governing over all.

Rani: What are some of your impressions from your experience with Holacracy in this training?

Nika:  One of my first impressions was that it has deep roots in natural systems thinking and integral perspectives.  This alone puts it in sharp contrast to our current reality in organizations and the greater social system since both of these ways of thinking about human life are unfamiliar to most people in Western culture.  My second strong impression was that this holacratic structure is a highly disciplined set of practices that I thought of as a “human maturity bootcamp” for the 21st Century. It’s very aligned with the Third Wave Business perspectives you and I are sharing in this blog.

Rani:  Would you unpack these impressions a bit more?

Nika: Early in the first training day, we learned about Holacracy’s focus on roles (“organizing around the work being done”) and ways of processing information in both tactical and governance meetings.  I made an immediate connection between this and the tendency in organic systems to “specialize and integrate”, leveraging the power of specialized knowledge and action through communication and collaboration across boundaries.  I believe this is one of the key benefits of holacratic process.  It supports the “natural fluidity of power”, fully empowering the flow of intelligence and energy through the system in service to agreed upon purpose.

There’s much evidence of the systems view in Holacracy.  I’m quite fascinated with the core practice of identifying and processing “tensions” (what needs to change in the current reality). I understand from Karim’s experience that this becomes very fast adaptive practice in tactical meetings, processing potentially large volumes of items that turn into owned actions to move blockages, fill gaps, realign resources, and add work tasks. Once again, I’m thinking of the “bee meetings” I’ve witnessed in my hives through which streams of information are processed via touch, movement, and pheromones, resulting in individual and group action.  He shared that once you’ve gotten used to Holacracy meetings, you can never go back to what we typically experience in work meetings without feeling incredibly frustrated.

From an integral view, Holacracy integrates all quadrants and aims for continuous spiral evolution of the organizational system.  I believe it’s intended to develop a culture and community of purposeful work and develop individuals’ capacities to participate in mature collective leadership.  The tactical process guides the work and the governance process evolves structure in a distributive way. Even though organizing is around work and not people (“roles vs. souls”), I sense that individuals in the holacratic system are not anonymized. It’s likely they are valued, supported in many ways, and free to fully engage in their roles and in the distributed governance of the enterprise.

As I stated above, throughout the training experience, I kept thinking about what a huge stretch Holacracy participation would be for most people.  Foremost, it requires a high level of maturity grounded in humility, reflexivity, equanimity, focus, succinct communication, integrity, and adaptability.  In his blog The Workologist, Sam Spurlin identifies four things he sees as necessary to succeed in an organization with a high level of autonomy such as exists in Holacracy.  These are akin to the leadership capacities we explicitly emphasize in our Integral MBA in Creative Enterprise and that are implicit in your classroom activities in Uptima Business Bootcamp – embodied awareness, curiosity, courage, reflexivity, empathy, collaborativity, creativity, and creative inquiry skills.